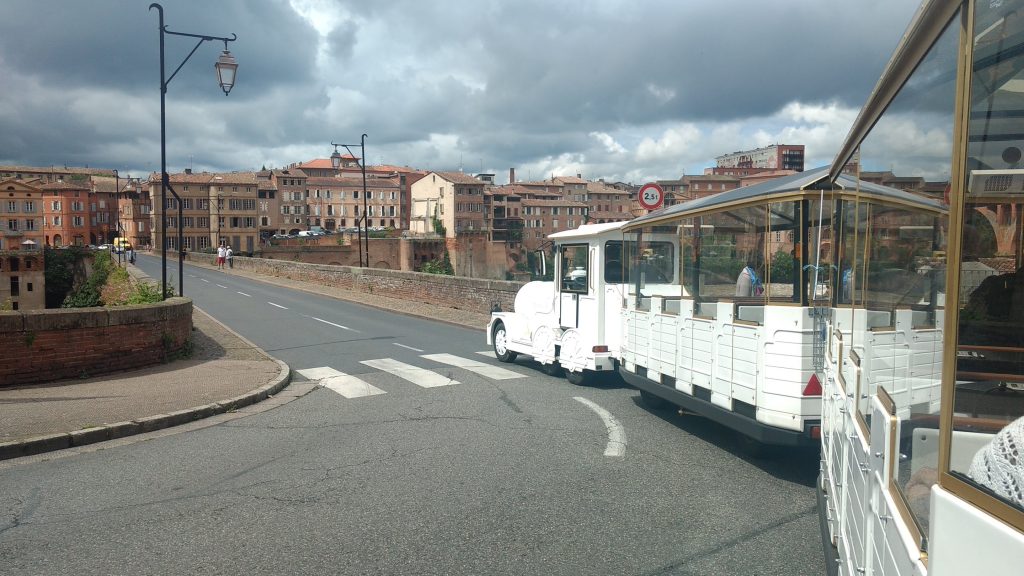 As the noisy white tram clattered through the narrow cobbled streets, I am filled with wonder at the navigation skills of the driver of this rather clunky long vehicle. He’s doing very well and considering the train runs around 5-6 times a day, he can probably do this in his sleep.

We’re in the town of Albi in Southern France and this tram proves to be a rather quick and easy way to get in a 45 minute glimpse of the city.  Though I’m using the term city rather loosely. It’s small as far as cities go and this is one place where you’d be hard pressed to get lost. The first morning here, I realized that all roads lead to the main cathedral. And you don’t really need GPS or a map after the first couple of hours—just check where you are in relation to the cathedral tower, which is visible wherever you go.

Located beside the Tarn river, the main attraction of Albi is the Cathédrale Sainte-Cécile. The outside walls of this imposing brick building are quite bland, but the sheer height is impressive. Built as a fort, it’s claimed to be the largest brick building in the world and was designated as a UNESCO World Heritage Site in 2000.  A few menacing gargoyles look out from the top right of the building while the entrance itself has delicately carved sculptures and arches. Once you enter the cathedral, you are immediately drawn to the very large organ situated towards the front—the work of Christophe Moucherel, which dates from the 18th century. It apparently has thousands of pipes and I could only imagine what it sounds like in real life when in action.

The next thing that you stare at in open eyed wonder is the ceiling—elaborately decorated and painted. Every section tells a different story and the audio tape you can hire inside the cathedral for Euro 5 gives you all the details. On the first floor is also a section showcasing treasures from the medieval era, with signs explaining their context and my very poor French wasn’t enough to decipher them, but some of them looked mighty impressive.

We also got an impromptu performance from a traveling group.

As medieval towns go, Albi has retained it’s charm of the yesteryears. When you’re walking around the streets, you might think a horse drawn carriage will draw up beside you and ask you where you’re heading and if you’d care for a canter. But then a motor car whizzes by quickly dissipating that image.

The town itself is very small with a very useful map the tourism office (situated right opposite the cathedral) will provide you. They mark 3 walking routes and you can probably cover that over 2 days—Circuit Pourpre, Or and Azur. One day if you’re really enthusiastic and plan to run from one sight to another.

The other worthwhile visit is to the Toulouse Lautrec museum which houses a lot of art from older and contemporary artists and is named after French artist, caricaturist and illustrator, Henri de Toulouse Lautrec. Fun fact—an early painting of his called La Blanchisseuse—sold for a record 22.4 million at Christy’s auction house in 2005. Gasp!

I enjoyed walking across Pont Vieux—apparently the oldest working bridge in France—and took my time sauntering across a couple of times. From there, you get a view of the new bridge a few hundred meters away, which is slightly larger and higher than the old one.

You can easily spend a day or two walking around, enjoying the river (there’s a path beside it which stretches for a few kilometers). There are some pleasant cafes and restaurants where you can enjoy cuisine from the l’occitane region to even Turkish kebabs and Lebanese food. The Place du Vigan seems to be quite popular for tourists and with a few restaurants with outside seating. This could be another place to watch the world go by, while you sip on a glass of wine.

I was pleasantly surprised when the driver of the tram greeted me warmly in English (I don’t usually presume that everyone knows the language!) but he seemed only to happy to practice it on me. He told me which channel to select to hear the English translation as the tram made it’s way through the by lanes of Albi. It can get a bit harrowing at times—you think the tram might touch the wall of some of the brick-wall buildings as it clatters through—but it adds a dash of excitement to your trip to this otherwise laid-back and quiet French city.

I stayed at the hotel Les Pasteliers. The owner spoke English and was very helpful. The room I got was quite small, but cosy and since I was out a lot, I didn’t really mind. The bathroom especially is extremely congested and might be uncomfortable for a larger/taller person, so make sure you check that before you get the room. Since I’m not blessed with long limbs, I managed to fit in!

They had breakfast at the hotel and it was mainly a large assortment of bread, croissants and jams/chutneys/butter and comes at an additional price. Some hotels might have breakfast included. Also a good idea to check while booking.

The tourism office has a book which recommends restaurants. Make sure you pick it up – it’s usually not on display and I had to ask for it. The helpful lady at the desk gave me one. I did look up places to eat too and found this quite helpful: Albi Restaurants

Restaurants tend to have a ‘prix fixe’ menu between Euro 20-25. But if you don’t want to spend that much, there are options which cost lesser. I found a Lebanese restaurant where I had a meal for Euro 10 and this crepe restaurant where I spent around Euro 15.

By foot is the best since it’s a very small town. And of course, get the tram ride.

Toulouse is an hour away by train and unless there’s a strike (it was going on while I was there), they run quite efficiently.

The other option is visiting Albi on a day trip if you’re in Toulouse.