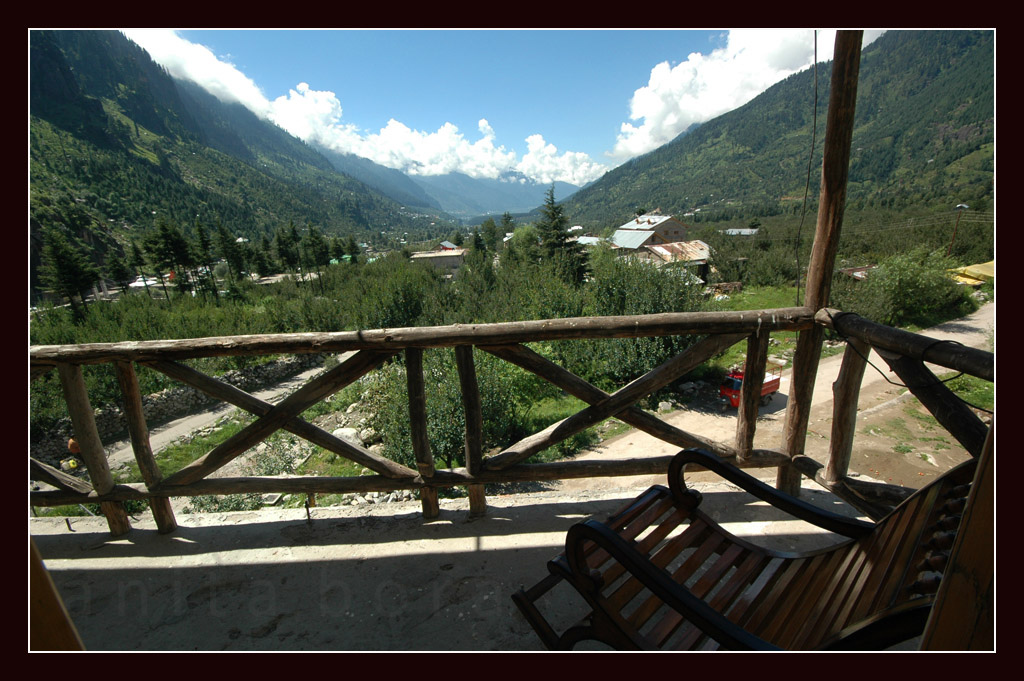 It’s been years but I have some nice memories of the town of Manali. I first landed there maybe 10 years ago for a trek and spent a few days hungrily drinking in the fresh crisp air (after the city, you can imagine the feeling). And then, in 2011, Manali was our base as we prepared for a trip to cycle up to Leh and I got to experience the town again.

If I lived in Delhi, I would probably step out much more often to escape the blazing summer heat and spend time enjoying the much needed respite – amidst lofty hills, lush greenery and cool breeze. Or even in winter, for a dose of snow and sub-zero temperatures, perhaps.

A glimpse of the snow-covered mountains, taken on a trip, way back in 2006.

As a destination, it’s the perfect place. Set amidst a picturesque backdrop of the snow-capped Himalayan range, the only things that should be on your mind are: romance… or adventure! So whether it’s a luxury vacation, a romantic getaway or an adventure filled trip (like it was for me), I would head back to Manali in a jiffy.

A cosy cottage in the hills

Situated at an altitude of 6020 feet, it is one of the most breathtaking attractions in the Kulu Manali valley. For more on the location, visit Go Ibibo’s travel guide on the town. It is also a prominent place in Hindu culture, named after sage Manu, the name Manali can be translated to mean the abode of Manu. During summers, it can be quite a hotbed for activity. Families and vacation seekers flock the cooler climes to enjoy the green meadows, rivers and pristine landscapes. For some, it is also a stop on the way to Ladakh.

Some of my favorite places to visit in Manali

A cafe somewhere in the old town

Most guides will give you a list of destinations to head to including the Hadimba temple and the Manali Gompa. But here are a few that I would personally recommend.

There’s Kothi, a lovely and picturesque destination located roughly 12 kilometers from Manali. It’s at the foothills of the Rohtang Pass and offers you some magnificent views of the mountains, glaciers and the Beas River. And it’s been featured in many a Bollywood movie too, in case you’re interested in that kind of trivia.

Then there’s the Solang Valley, a plateau nestled between Manali and Kothi. Surrounded by snow-capped mountains and glaciers, it’s a great spot especially if you have a penchant for adventure. It’s also the destination for a yearly winter skiing festival.

If you want to trek, hike around in the forest, past the Dhoongri temple, a stray path opens into a deodar, horse chestnut, walnut and maple forest that is part of the Manali Sanctuary. There are also options to stay in tended accommodation at Lambadug or Gailani Thatch – check HimachalTourist.com for those details.

And don’t forget to stroll around in old Manali town – it’s quite a difference experience all together.

Where to stay
There’s a lot to choose from. From luxury to budget, to hippie style accommodation. Sterling Holidays – White Mist has a property that’s worth checking out; especially if you’re traveling with family and want all your creature comforts too. It has the usual play area, sightseeing tours, adventure activities and options ranging from 1 bed studios to apartments for members and classic for guests.

Best seasons to travel
The most ideal period would obviously be summers. While temperatures in the plains break new records almost each year, the temperatures in Manali range from 10-25 degrees Celsius. But if you can brave the cold, why not choose winter? Starting around October, it lasts till around February and you’ll get to witness below zero temperatures.

Reaching Manali
Fly: Bhuntar airport, located 10 kilometres from the hill station.
Rail: Jogindarnagar railway station, well connected to several major cities.
You can also travel by road from Deli, Chandigarh and Dehradun. We took the overnight A/C Volvo bus from Delhi and it was quite comfortable.

More stories and info:
Life in Manali
Delhi to Manali: A guide