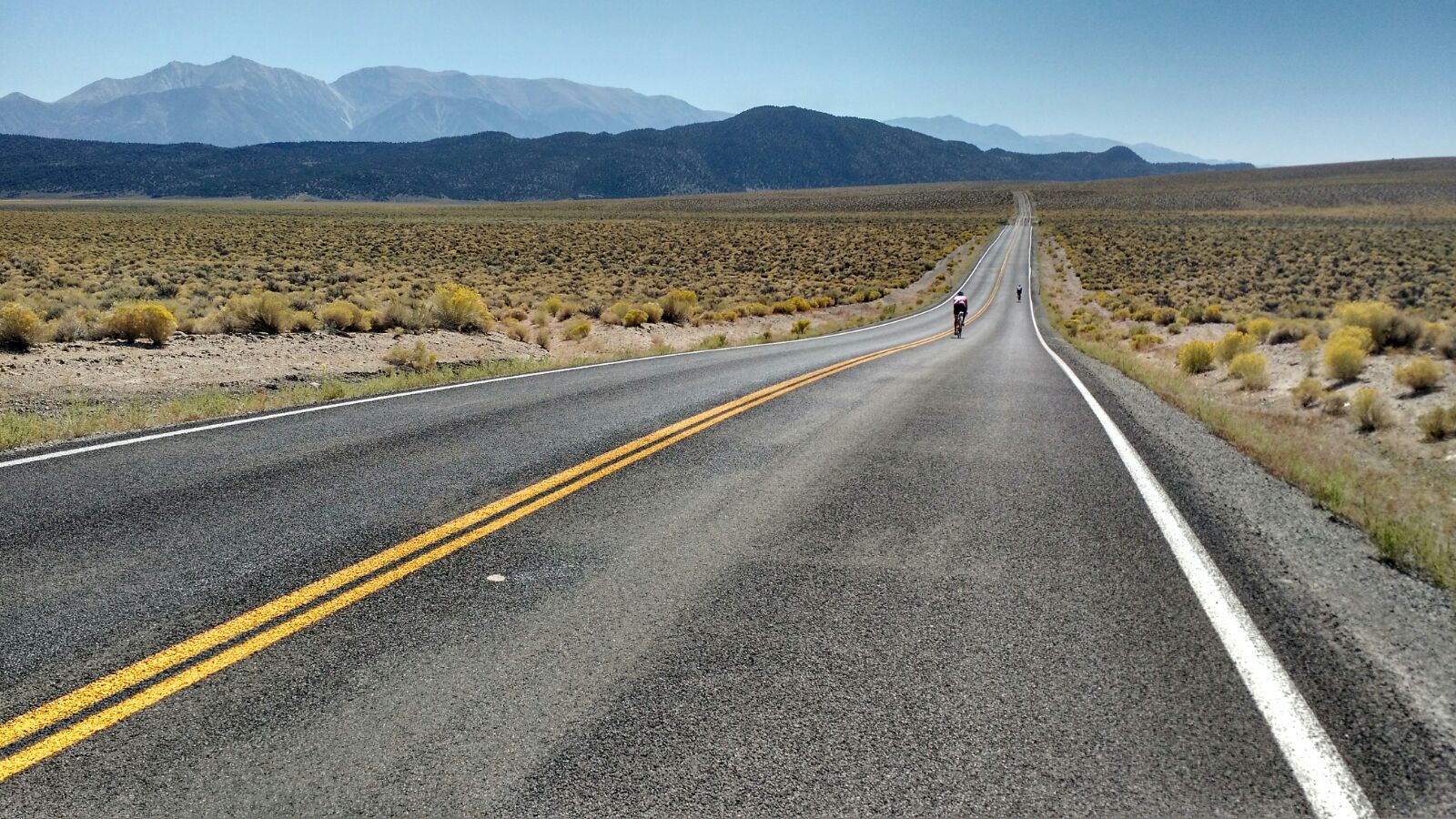 What doesn’t kill you, makes you stronger, they say. And I’m hoping it’s true.

After the swim, having been sufficiently nourished and rested, we land up at the bike venue at 8 am in the morning. It’s pretty cool, but the weather forecast promises a warm day and I discard my wind cheater at the start itself. I have arm warmers which I hope will do the job.

There are around 400 riders at the start point. An impressive turnout for an event in this part of the country. Mammoth Lakes is a little town in Mono country, surrounded by mountains.

One at the start point, with some of my team members.

Bike rides are always unpredictable. You could be feeling fit and fine at the beginning and then like you’ve gone through hell and back a couple of hours later. Or you could start off feeling crappy and then blossom, like a flower, your legs opening up as the miles add up.

Thanks to one tough practice ride a weekend prior, I was feeling fine at the start of the ride. My main focus was going to try and maintain a steady pace and not run out of energy. I also had to leave a bit of juice in my legs for the next day’s walk (the 12.4 miles up to Tioga pass).

A practice ride that took me up West Alpine Road in the Bay area.

The warm-up began with a steady climb of a few miles leading us out of town. And then we had some thrilling downhills, enjoying the cool wind in our faces and racing down at 40 mph on some slopes. For a few minutes you feel what extremely fast bikers go at normally!

The cool weather helped the riders in the morning. Everyone was zooming along and then we reached the highway, where we turned right. Another few miles and we had a diversion towards Crowley Lake. A rather scenic area, and all the while on our left we could see the lake. A few miles of rolling terrain and we reached mile 20, and our first rest stop. At that point, I was feeling fine. A quick break and I set off again. The road loops around the joins the highway and a few miles on, there’s another diversion. This road to Benton Crossing eventually leads up to Watterson’s Summit, would be our tougher loop.

I had to stop for a few pictures, it was just so gorgeous out there – wide open plains, with yellow shrubs, cows grazing lazily and mountain ranges all around. It reminded me a bit of Ladakh. And of some of the stark scenes of Death Valley.

I was able to maintain a good clip. Not fast, not too slow. After around 10 miles on this road, the slow climb started. The gradient did go up to around 7-8% at certain stretches, but overall, the climb was not too bad. Being a slow climber, I focused on just keeping on pedalling, and took around 2-3 breaks for gulps of water and a few bites of my energy bar.

An official race photo taken on the Benton Crossing road. I think this was an uphill!

One of the official race photos, capturing the beauty of the background.

Meanwhile, riders were zooming down on their return journey. I plodded on.

Towards the end, is the steepest bit, right before the next rest station. I guess they kept the best till the last! I did a bit of a snake dance (the roads were closed for us at that stretch so I knew there weren’t any vehicles likely to come from behind) and with a final push, was relieved to see Waterson’s summit.

I could feel a bit of tiredness in my legs by then, but the good part was that a major climb was done. I tried a bit of everything they had on offer. Salted chips, oranges, bananas. Hydrated. Stretched. Took some rest. And then around 15-20 minutes later, was back on the bike.

Someone volunteered to take a picture at the turn-around point. Thank you!

The heat was on by the time I turned around. I knew this leg would be tough. I tried to enjoy the scenery, but with no cover at all, it was getting quite warm. The return had a few rolling climbs. Not too steep, but enough to suck some bit of energy out of you.

I did my best to enjoy this stretch. I also stopped 2-3 times, both to enjoy my surroundings and give myself short breaks. Though I’ve cycled at high altitudes (it’s been many years), this was a long effort at nearly 7000 feet and I didn’t want to really suffer too much.

Mile 60 finally was within sight. By then, I was a bit tired. But I decided not to take another break. Just had a sip of my water and started off again. Only 10 more miles I was thinking. But I think these 10 miles, physically was equal to whatever I’d already pedalled!

Back on the highway, I tried to keep up a good pace, but could feel myself slowing down. I got passed by dozens of speedy monsters – most of them finishing their 100 milers! I tried to keep myself motivated.

Finally, reached a point on the highway, where we turned into a side road back to Mammoth Lakes. The countdown began with a sign that said 5 miles to the finish. Also the longest 5 miles of my life.

I drummed up whatever energy I had left and started pedalling – slowly and steadily. Lots of encouraging words from passing cyclists. Which is the nice part of cycling here – there are always riders checking on you.

The last part was just counting strokes because the incline didn’t let up. A cyclist passed me by and commented what a “terrible way” it was to end a ride. I couldn’t agree more. I needed one downhill to revive my strength. But it was not to be.

I was hardly moving and I laboured over every pedal stroke. It was great relief to see the finish line. The camera person sitting there yelling out made sure I brought out my smile at that moment. And some of my team mates were there cheering me as I crossed, which made me feel a whole lot better.

At the finish line.

An event that is going to be pretty memorable for me. The scenic beauty of the course, combined with the fact that you’re cycling at altitudes between 6-7k feet makes this a challenging ride. A little more preparation probably would have gone a long way.

But what’s a bit of suffering, right? And then, there’s the promise that I’m getting all the more stronger!

Official sign up page for the event: Mammoth Grand Fondo

Next: A 12.4 mile hike up to Tioga Pass and the last event of this series.