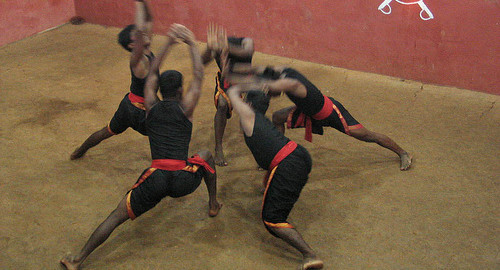 So here’s a post about the kind of interesting physical activities I’ve tried over the years. I’ve left out what I consider more common activities like running, cycling and walking. And I must also admit, a bit sheepishly, that I haven’t really stuck to anything in the long run. And all this seemingly hard work, hasn’t exactly resulted in a super model figure. But the fun is in the trying, I have convinced myself.

Shiamak Davar Dance Classes: So, this was a long time ago. When I decided I should learn how to dance. I do have difficulty moving my hands and feet in any organised form (which is why I’ve stayed away from aerobics!). But I decided to give it a go. It was a fun class. I was horribly out of sync all the time. But the high point was performing as a part of an annual function. In front of people. I have no idea what I did and whether my feet moved at all. But at least I can say, “I did it”. Thankfully, there are no pictures of the event. At least as far as I’m aware.

Kickboxing: Amazing for legs, hands, muscles – builds up stamina and is also good fun. I went for classes with a gentleman called Ashwin Mohan for nearly a year and enjoyed it immensely. Before class, he would make us run out, onto the roads and even make us do some jumping over walls and high obstacles – not surprising since he is also a parkour expert. If you’re relatively young and like high energy activities, give this a shot (or kick, should I say?!).
– Shootfighter

Power yoga: This had me addicted for a couple of years. I got to the stage when I was able to do 108 surya namaskars, once a week. A magic number in the world of yoga. Four days a week, religiously, I’d report for class and indulge in an hour long session where all the limbs opened up and one would have to contort to various positions. And of course, since this was the “power” version, we hoped we were burning more calories! Purists would probably frown on this form, but I enjoyed it for the few years I went for class.
Artistic yoga

Kalaripayattu: I then discovered this ancient art of defence from Kerala – quite an effective way to build physical fitness. So two hours of Kalari, two days a week was actually enough to push me to my physical limits. Because kalari is pretty intense. I also realised that doing kalari in one’s later years (which in my book is anything after 30) is not so easy. When your limbs are supple and young, it’s probably the best time to learn this art form. It’s beautiful to watch and extremely physical and demanding in practice, but after a bad knock to the knee, I realised that I had perhaps crossed the age where I could actually take it to the next level. So much as I enjoyed it, that’s where Kalari and I parted ways.
– Kalaripayattu

Pilates: After my achilles tendon injury in 2012, I took some time to get back to any physical activity. Resuming running was still not comfortable so I decided to do something indoors. Pilates turned out to be interesting form of exercise. It helps build core fitness levels, I also found it beneficial for other activities like cycling. I found my ankle also getting better as a result of some of the exercises on the reformer. Possibly something I’d like to get back to in the near future.
– Pilates at the Zone

Bikram yoga: While on my recent vacation in the US, I tried out this form of yoga, established by a much maligned gentleman of Indian origin called Bikram Choudhury. Not practiced in India (as far as I know) it’s gained a lot of popularity in the US and other parts of the world. What I surmised is that going into a hot room to exercise is quite an unattractive proposition for folks who already live in a hot country. We’re already sweating outside. Cold or ice yoga would probably be a big hit if it ever got “discovered” here! But getting back to Bikram yoga – it’s a series of 26 postures and breathing exercises in a sequence, performed in a room heated to 40-45 degrees celcius. Your limbs open up and become more supple. What I enjoyed was sweating buckets, and it sure felt like all the toxins were leaving my body. And there was weight loss (which is a big challenge for me) when I was doing it regularly. So I did find it pretty effective and I would have probably continued it, if I had the opportunity. But… that’s not to be, since we don’t have anyone who’s been brave enough to open a studio here yet.
– Bikram Yoga Centreville

So besides running, cycling and badminton (which was responsible for my injury!), these are some interesting physical activities I’ve tried.

Next on my list: Spinning, Aqua aerobics, zumba (!), belly dancing (why not?) and TRX! At least when I’m 80 and need a walking stick, I’ll look back and say I’ve tried everything. And it will possibly be true.

What interesting activities have you tried and tested over the years?