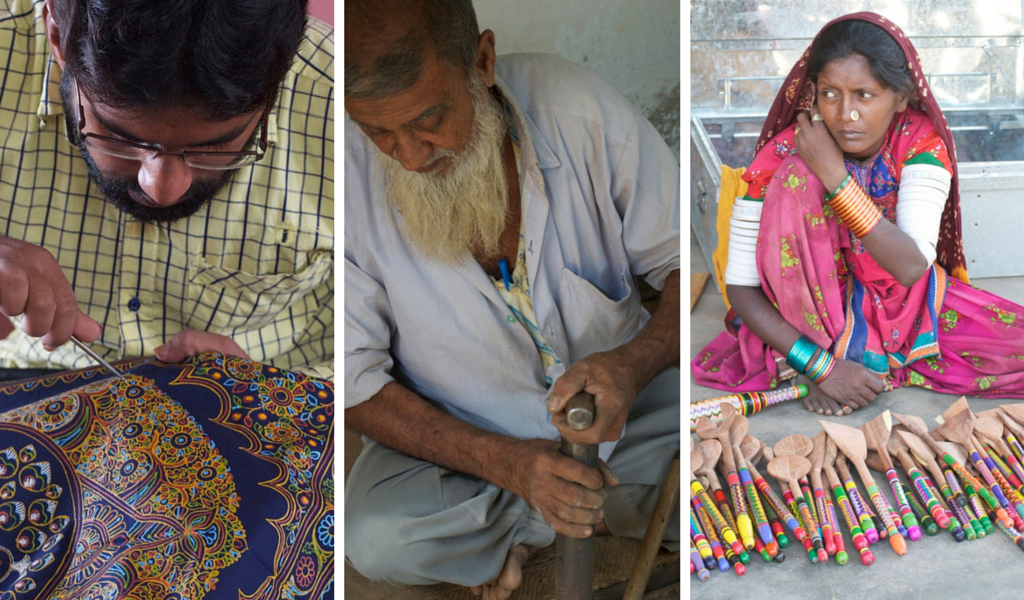 It’s a sunny day when the taxi driver pulls up in a rather non-descript looking village and drops me in front of an ATM. I don’t really see what he wants me to see. Yet.

And then I see this guy, holding a smart phone, standing beside the ATM and I realize that there’s some invisible pact that my taxi driver and this person are already a part of. I don’t want to know too much.

He comes forward and leads me on to my first stop in Nirona village. I am a few days into my Gujarat trip, starting from Bhuj and today my aim is discovering arts and crafts. I’ve always been inclined towards handmade and anything time consuming and local. And Gujarat is well-known for its variety when it comes to crafts so I won’t run out of things to see and experience.

Craft is a truly fascinating domain. When machines and robots have taken over, there is even more charm to something handmade. Some call it a dying art, which some day will not be sustainable. But I think that the fact that it’s so much more difficult to get genuine handmade products, increases the novelty and makes it more sought after.

Craftspeople really deserve our respect. They make beautiful things, spend hours over perfecting them, and then we carry them with us and make it part of our homes and our lives. It’s an intrinsic part of our travel memories. I’ve always collected things from my travels. They were not only reminders of my time traipsing through remote villages and towns experiencing local life, but also my way of supporting local artistry, in whatever small way I was capable of.

Gujarat is an interesting example of how arts and crafts thrive in extreme conditions. For example, many of the crafts are driven by men and women are involved in the side roles. Like leatherwork, tie and dye, block printing – the main work is done by men. Women do things like stitching, embroidery and painstakingly tying pieces of cloth (bandhini) and also selling the wares.

The power of a ‘kalam’: Rogan art

I meet the Khatri family, which is into the distinctive form of painting on fabric called Rogan art. Apparently, there is no one else who practices this particular form of art (possibly in the Indian sub-continent at least), making them a unique family. It originated many hundreds of years ago and the designs and motifs demonstrate a Persian influence. Again, it’s the men who do the actual kalam work – creating patterns using a sharp nib dabbed with color. The women assist, while the young ones get initiated pretty early on too.

Gafoorbhai Khatri, a National Award winner is the head of this family and his entire family learns and practices this work. While the art was slowly lost over generations, the Khatris are known to be the only family who still practice it.

The kalam itself is one size but the patterns are all of different intensities depending on the pressure applied. It’s rather fascinating. I’ve tried my hand at painting and I know hard it is. One of the family members demonstrates how the pattern is applied and then the material folded, generating a mirror image on the opposite side. The most fascinating part is that the design is not traced or drawn, but applied directly. It basically comes from their collective memory and ancestry. They proudly show me a framed article of a huge piece that was presented by our now Prime Minister to the President of the United States.

Rogan makes its way into different accessories like pillow cases, bags, cushion covers and even sarees. I pick up a colorful red bag for myself.

Not just for the cows: Copper bells

The whole family seems to be busy doing something or the other. The son is busy on his smart phone, while his father hammers away patiently fashioning a big bell out of a piece of metal. A few minutes later, the copper sheet resembles a bell shape. It’s then sent to the back of the house, where other members pitch in. First, it’s covered in copper mud and fired for 20 minutes to get a shine. The men typically do the pounding, shaping while the women do the polishing, firing etc. Every member seems busy doing something or the other. Besides the newborn in the family, possibly.

I watch the proceedings for a while when a TV crew appears out of nowhere and interview Luhar Husen Sidhik, who is the patriarch of the family. They also want to get a few customer quotes and I have no idea what I said in Hindi, but I think I can claim some fame on Gujarati TV.

I pick up a rather large, noisy bell picturing it on my doorway already.

Thanks to my superior observation powers (and the fact that he also told me), the smartphone owner is actually Luhar’s son. Seeing he’s done his work and led me till this point, I am passed onto the next hands – a young boy who then leads me further into the village.

Sadly, I look around and notice a lot of garbage everywhere. Were tourists leaving all this plastic behind or was this an issue of villagers adopting a plastic lifestyle and not knowing how to dispose of it? I had no way to know, but these kind of sights always sadden me. The fact that rural India is now filled with plastic everywhere. Even the earlier pristine waterbodies, where villagers could probably swim, are gone. Sacrificed to the plastic and garbage menace. However, I’m getting a bit out of track here, so let me come back to the crafts.

Laquer is basically a kind of wax, which comes in different colors. It is an overlayer, which can be applied to things like boxes, utensils, ladles etc. to make them more attractive. The mechanism is operated by the feet mainly (guided by the hand) so one needs to be quite dextrous, I’m guessing.

I watch the members of the Bhachaya family at work – here again men operate the tools, while women help. They expertly move the item on the contraption and then apply different laquer colors forming interesting patterns. The lac is collected from the forest and extracted from a kind of stone. A young boy adeptly spins the handle and applies the lac. He’s in school, but his on-ground training has started already.

So, are they happy with all the tourism efforts I ask one of the craftspeople here. The answer is in the negative. To begin with there’s no signage at the village and I notice that too. You could miss the turn if you didn’t know. The village definitely needs to be cleaned up and taught how to handle it’s waste (like any other village/city in the country). It’s no different, still grappling with change (also called the plastic revolution).

They seem to be doing reasonably well financially though. At least tourism/visitors seem to be buying products. Khatri, from the Rogan art family says they have no distributors -everyone comes to the village and buys whatever is available in their stock. And they don’t supply in bulk. So there is no inventory as such. Possibly why I haven’t seen much of it in stores. Unlike a lot of other places though (like Rajasthan!), one thing I found was that they weren’t pushy about their art. They did their job of showing you their art and you decide. However, considering they do take an effort, it’s always nice to at least show your appreciation by picking up something.

If you’re interested in exploring the arts and crafts of Gujarat, Bhuj is a perfect base. I stayed with friends who run the Shergarh Tiger Camp and are also soon opening a homestay in the town.

Getting to Bhuj:
– Air India and Jet Airways operate flights from Mumbai.
– You can also take a train from Mumbai.
– Bhuj is connected from all other major towns/cities in Gujarat.

Nirona Village is around an hour away from Bhuj.

Read more here:
— Rogan art on Gaatha
— A photo journey on Lensing It
— Lifeisavacation on Nirona

— Photo Album on the Crafts of Nirona