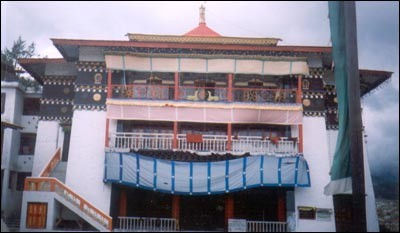 Many, many years ago the intrepid Bora sisters took off to Arunachal Pradesh. At that time, it was a big deal to travel without guardians, but we were quite determined to make the trip happen. The parents had given up on us by then, I think.

The gate at Sela Pass

The journey to Tawang is a long and arduous one-day affair. And to add to the woes of women travellers – there are really no rest rooms enroute. But we still made it. By jeep, which is the most common mode of travel. The roads are extremely narrow and there are many places which are just wide enough for one vehicle. It still amazes me as to how people drive on these roads. The vehicle is usually bundled with around 8-9 passengers, to ensure that they make the most out of it.

Jeeps are the usual way of getting to Tawang

It was a good trip too – we visited the Tawang monastery. We trekked to a nunnery. Saw yaks for the first time. And young monks to be everywhere we went. And I think it was also our first encounter with snow so that was exciting. I had a really basic camera in those days, but I do have a few grainy souvenirs from that trip!

The two of us striking a pose at Sela

I did go back to Arunachal Pradesh again later, but this first trip remains a special memory…